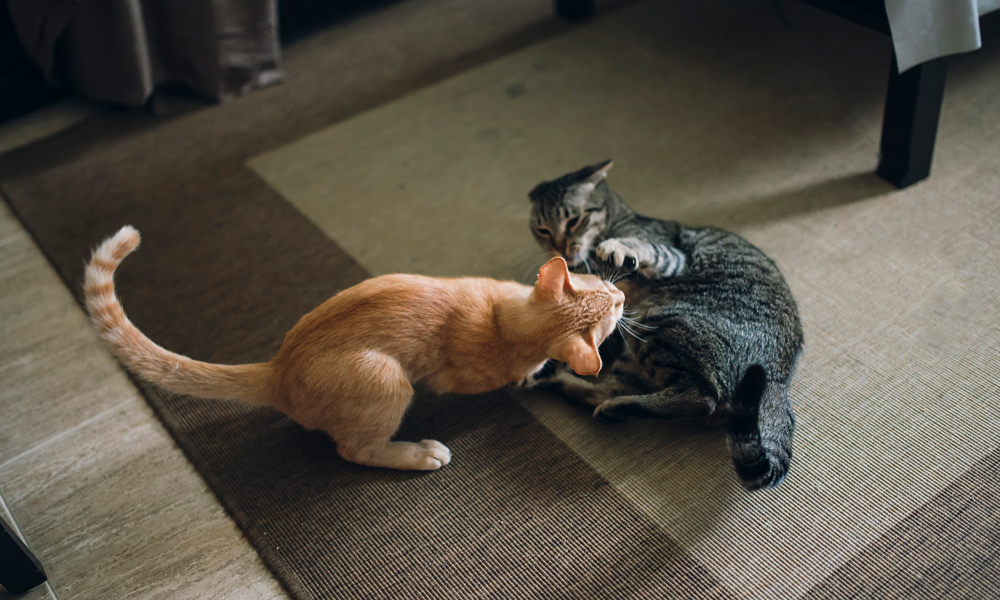 Does a new kitten incite hissing and swatting from a senior member of your feline family? Or maybe relations soured between two cats that once got along just fine. Either way, when cats start hissing, chasing and getting into full-on fight mode, it's a stressful situation. Noise and ruckus aside, the last thing you want is the cats to hurt one another.

Fighting between cats is not an uncommon problem for pet parents. More than a quarter of cats surrendered to shelters are given up by their owners because of ongoing aggression issues, according to a study cited by the Cornell Feline Health Center.

Both fear and aggression can incite an attack and a fight. This guide will help you understand why cats do battle, and what you can do to help broker a peace agreement.

Why do cats fight?

It can help to understand that feline social structures are complex, and there will be times when it's impossible for humans to fathom what makes some cats "acceptable" housemates and others not.

Feral cats hunt and live independently, but they may assemble into a social colony. These groups are mostly made up of groups of mother cats and their kittens, with the occasional male joining as a "periphery" member. Even though they may socialize in a neutral area, colony cats still stake out individual territories for hunting and sleeping. In a domestic setting, "kitty politics" can be downright baffling to humans. But this guide can help you narrow down just what's fueling the fight.

Before the attack: Signs of cat anger and fear

Before a fight breaks out, your cats' body language may show signs of aggression. If you can, separate the cats before the combat begins.

These are the warning signs that a cat has entered the aggression mode:

When cats are fearful, on the other hand, the cat takes on a more "contained" and self-protecting posture:

What you can do about cat fights

Now that you know why cats get into their tussles, you can take the right action to put a stop to them. Whatever you do, don't let the cats "fight it out." Aggression can escalate from chasing, yowling and swatting to full-on scratching and biting.

Breaking up the fight: When cats feel aggressive (or fearful), it's natural behavior for them to lash out. The target could be a nearby cat that isn't involved with the situation, or it could be your outstretched hand. This behavior is called redirected aggression. Meaning instead of attacking whatever's causing their amped-up state, the cat attacks whoever's nearest. For you, that could result in bites and scratches. (In episode 50 of the Raising Your Paws podcast, we explore two common, surprising causes of displaced aggression.)

Have your cat examined by a vet, especially if the fighting comes on suddenly. As referenced above, cats may be lashing out to protect an inflamed or injured part of their body, and cats excel at concealing injuries from their humans.

How to reintroduce sparring cats

How do you get two fighting cats to live in harmony with each other? It's a slow, gradual process, sometimes taking several weeks before the cats agree to a ceasefire, so be patient.

Once the cats respond calmly to the other's presence (no signs of aggression or fear), release them in the same room, on opposite sides. Again, feed them a meal. Gradually increase the time spent together in the room until you can be sure they can handle each other.