Are Boston Terriers good dogs? A look at their personalities, history and care

Are Boston Terriers good dogs? A look at their personalities, history and care 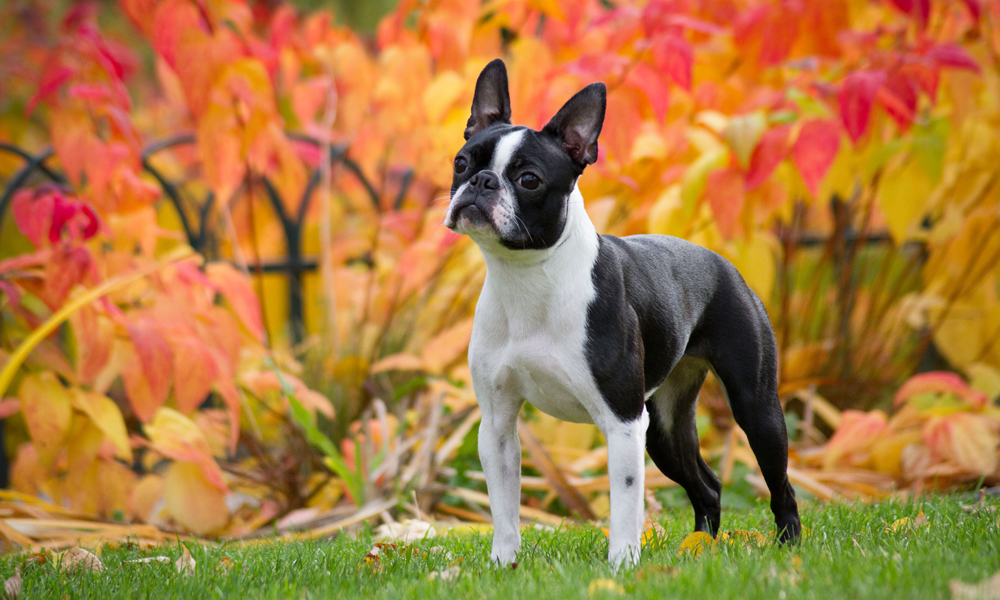 Boston Terriers are handsome, loyal, packed with personality and love nothing more in life than to tag along with their humans. This makes Bostons an ideal doggy companion for just about any lifestyle. Whether your family is active and always on the go, or if couch potato best describes your weekend style, it’s hard to go wrong with this amazing breed. Thinking about getting one? We rounded up some facts and advice to help you decide.

Boston Terrier at a glance

Appearance: This short-haired dog with black-and-white hair is known for their heart-tugging big-puppy-eyes stare. They also have large pointed ears (that are sometimes cropped) atop their blocky heads, a short muzzle, and a small tail.

Height: Withers height (top of the shoulder to the floor) is 15-17”

Breed type: Non-sporting, and not technically a terrier

Fun fact: This American breed is the state dog of Massachusetts (naturally).

Top job: Love and affection! The Boston Terrier is a true companion dog and is especially well-suited for urban life.

Bottom line: Always eager for a game or a walk, the Boston Terrier is an intelligent, loving dog that fits in to just about any family lifestyle.

The Boston Terrier is famous for being a clownishly sweet pooch. They’re affectionate pets that get along with kids and cats. But most of all, they’re happiest when they’re by your side, because when it comes down to it, they’re the epitome of a loyal dog.

They’re not nuisance barkers, nor do they shed or need tons of exercises to take the edge off, all of which make them ideal for small-space urban living. They’re not wary of strangers, so in most cases, when friends come over for a visit, they’ll get a warm greeting from the welcoming committee.

Their silly antics will amuse you

Boston Terriers will happily busy themselves with a ball or a toy. Watching them tussle about with their crazy play-growls will bring a grin to any pet parent’s face.

In addition to the breed’s pleasant personality, they’re intelligent dogs, and some pet parents say Bostons have their stubborn moments! To steer clear of behavioral issues, you’ll want to maintain consistent training so your pup sees you as its leader.

The Boston Terrier, as its name suggests, is an American breed that first emerged around 1875, when a black-and-white, square-headed dog named Judge was born. Judge was a cross-breed of the English Bulldog and the English Terrier (a show dog that was beset with health issues and is now extinct).

Back then, breeders would cross terriers with bull breeds to create pit fighters and competitive ratters. But fate went in an entirely new direction for the descendants of Judge. “During the breed’s formative decades,” says the AKC, “selective breeding transformed the bulky fighter of Judge’s time into a smaller, sweeter, and more attractive companion dog originally called the Round Head by its partisans.”

In 1881, the Boston Terrier Club of America formed, and in 1893, the breed became the first U.S. non-sporting dog to be recognized by the American Kennel Club.

Thanks to the short, smooth hair that lays flat on the body, the care and grooming of the Boston Terrier is minimal.

Brush their coat weekly with a soft brush or a rubber grooming mitt to evenly distribute the oil around the hair follicles, and remove stray hairs.

Bathe every couple months or so, or as needed, such as when they get into messy mischief. Most pet parents find they can get this task done at home pretty easily, without having to take them to a groomer.

Keep toenails clipped, as Boston Terrier nails tend to grow quickly. Set reminders for regular trimmings, so they don’t get snagged on carpet fibers and other textured surfaces they’re walking on. Long nails can also get in the way of running and walking and can cause pain in their toes.

As with many breeds, the Boston Terrier can have specific health issues. Be sure and keep up with annual wellness visits, and use this guide to help you keep an eye out for ailments that need attention.

Their eyes express everything from love to mischief. But their orbs stick out a bit, and they can be prone to infections, cataracts and other ailments. When it’s time for their weekly brushings, take a close look at those peepers to make sure they’re healthy and free of signs of irritation.

Respiratory issues can also befall the Boston Terrier, due to the fact they’re a short-nosed breed, or brachycephalic. When they’re overheated or stressed, their airway can collapse, making breathing difficult to impossible. Their short noses make it more difficult for their bodies to cool themselves efficiently.

Smaller breeds like Boston Terriers are prone to experiencing patellar luxation, which is the medical term for a condition where the knee slides out of place. This can be caused by abnormal leg development, where the groove holding the knee cap in alignment is too shallow. If your Boston frequently stops to stretch his rear leg behind him, that should tell you he’s feeling his trick knee. Of course, if your dog yelps and starts limping, you’ll want to take him in for a vet examination as soon as possible. Some Boston Terriers will require surgery to correct their dislocated knees and ripped ligaments, but others will pop back into place without intervention.

With that in mind, keep your Boston Terrier’s weight in check. Carrying even a few extra pounds puts more pressure on their knees, increasing the risk of injury. Because they’re small dogs, it doesn’t take much to overdo it with treats and handouts.

[To give your Boston Terrier the perfect portion to keep his weight in balance, read How many treats should I feed my dog?]

Finally, a small percentage of Boston Terriers can develop deafness in one ear. During puppy wellness visits, you’ll want to request a screening.

Activities with your Boston Terrier

A couple walks a day is all the exercise a Boston Terrier needs. At the same time, with their playful personalities, they’ll be more than up for a game of tug-of-war, fetch and splashing in the lake, as well as a run on the agility course. When you’re spending time outside, pay attention to their special needs when it comes to hot and cold weather.

On cold-weather outings, keep in mind the Boston Terrier’s small stature and thin hair coat can make them vulnerable around snow and chilly winds. Get a warm jacket for your pup so he stays toasty and comfortable during cold-weather walks.

If you’re heading outside on a hot summer day, make sure your Boston Terrier takes it easy. Their short snouts make them less efficient than longer-snouted breeds at shedding excess heat by panting. On top of that, when it’s hot and humid, breathing can become very difficult. So when enjoying outdoor activities, provide plenty of shade and cool water, and don’t overdo it. When he shows signs of overheating (rapid, noisy breathing, collapsing, vomiting, bright red or bright blue gums), get him seen by a vet as soon as possible.

[Read our guide to learn why a back-clip harness is best for short-nosed dogs like Boston Terriers.]

A long, happy life with your Boston Terrier

Boston Terriers fits right in to just about any lifestyle. To get the most out of your years with your Boston Terrier, don’t underestimate the importance of gut health. At NutriSource, we formulate all our foods with our innovative Good 4 Life® system. The probiotics and prebiotics facilitate mineral absorption and support immunity by the production of natural antibiotics and antifungals in the gut. Find NutriSource at your local, independent pet retailer.